Lessons from the “Before” Trilogy

Remember Ethan Hawke in the 90s?

Quintessential bad boy with a cigarette in his mouth and an anti-establishment attitude.

My sheltered upbringing prevented me from being familiar with most of his films, but my childhood friend Bridget was a total fan, so I couldn’t help but know who he was.

And I’ll admit it, I watched Reality Bites behind my mother’s back on more than one occasion, and may have owned the soundtrack… and may now know every word to Lisa Lobe’s “You Say.”

I seldom insist on watching chic flics in the presence of my husband, but since yesterday happened to be record-breaking rainfall, and my husband was off for some well-deserved man time, I didn’t think twice about settling in to watch the 1995 (not quite) hit, Before Sunrise.

The premise of the story is that two strangers meet on a train, and agree to spend the evening meandering through Vienna with each other for no other reason than because they were young and why wouldn’t you.

The guy, Jesse (Ethan Hawke) convinced the girl, Celine (Julie Delpy, who BTW just did a phenomenal job directing, writing and co-starring in the Netflix series On The Verge) to this experience because, as he persuaded, when they are 40, they would look back and be glad they did.

The two then spent the evening deep in conversation, romance, and ultimately end up lying together in a park in Vienna with a bottle of wine, and …

The following morning they agree to meet each other in six months in exactly the same spot.

As I began searching for satisfaction of my incomplete romance quest, I realized that this film had a sister that was on next.

Lather, rinse, repeat of the first film except this time the pair are in Paris: he on a book tour, she seeking him out after reading his book, which was based on their night in Vienna.

He’s got a flight to catch to get home to his wife and son, but he’s so hypnotized by her, that he can’t help but follow her to her apartment…

Still unsatisfied I’m resolved at this point to go to bed until I see that there is still another chapter in this godforsaken series.

Before Midnight begins and I confess to my husband, who has just returned home, that I have a problem.

This time the show starts and the couple are actually together, driving in Greece with their twin daughters sleeping in the backseat after just dropping Jesse’s son at the airport.

The conversation changes from hypotheticals about what makes people fall in love, happy, or discontent to the insecurities couples face after the honeymoon phase dissipates.

The majority of the film centralizes around a quarrel between the two that could leads some to ultimately break-up, and (spoiler alert) at the end of the film, Celene storms out in a furry.

It got me thinking…

It’s amazing how our brains create fantasies that something else is better than what we have now.

Jesse’s confessed discontent in his marriage did not lead to a perfect relationship with what he thought was the perfect woman.

Celine’s skepticism of love, and allusiveness during the affair, translated to insecurity in the relationship.

However, they both decided that if things were hot during the affair that in a relationship wouldn’t they be the same?

The truth is that our brains are conditioned to find fault in whatever situation we are in. In psychology this is referred to as negativity bias. To cope, we create the construct (with our thoughts) that something else (there) is better than what we have (here).

This works for us psychologically because according to Dr.s Lisle and Goldhamer’s Motivational Triad, our brains are motivated to avoid pain, seek pleasure, and conserve energy.

So in order to avoid doing things, simply thinking things satisfies our brain.

Jesse and Celine are both focused on a fantasy that if they were together then they would have all the love, security, satisfaction they desire (there) rather than feelings of hopelessness, sadness, skepticism (here).

If they had focused on appreciating what they had at the time (here), and committing to make it the best version of what it could be: a best-selling book, a close relationship with his son, a wife he was committed to (Jesse); a talent for music, a self-driven ambition for success, an ability to love while acknowledging reservations of intimacy (Celine); then the there may not have been as compelling.

But our brain loves a fantasy, doesn’t it?

When I lose weight…

When I get that promotion…

When I make x dollars…

When I find the right partner, then I’ll finally be happy.

But the truth is that any one of those things, don’t make us different people, they make us more of who we are.

When you wake up at your goal weight, you are still you– a body transformation doesn’t come with brain surgery.

So if we are actually conditioned to be who we are, how do we ultimately change?

We have to start with where we are now, and make the change, then the transformation comes.

If I decide today that I’m going to lose weight, but I become fixated on hating my thighs, and I allow my brain to continue focusing on the perceived volume of my thighs, then I continue to train myself to poke holes at what’s wrong instead of appreciating what’s right.

Rather, if I focus on celebrating everything I’m doing right– sticking to my workout and healthy eating plan, appreciating how strong my body is, the joy I get when I finish what I start– while dismissing the voice that wants to poke holes, then I train myself NOW to think like the person I want to BECOME.

There’s a tale that reads that wolf you feed is the one that wins.

The relevance of this statement spans every area of our lives.

So I ask you, dear reader, what do you choose to focus on today?

We change by becoming the there person here.

We change by becoming the person we want to be now.

While my brain wants me to focus on things like nausea, aches and pains in my body, the scars that now extend across my abdomen from surgery, discomfort I feel from cancer treatment…

I choose finding the good in everything.

I appreciate the sunshine peeking through the blinds after 36 hours of rain.

I choose to cutely snuggle with my husband when my brain wants me to launch out of bed to do god knows what.

I honor the opportunity to be alive and to love the here.

When we focus on the here,

When we are present with the now,

The there is still interesting, but admittedly not better, not worse.

What changes is us. 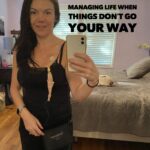 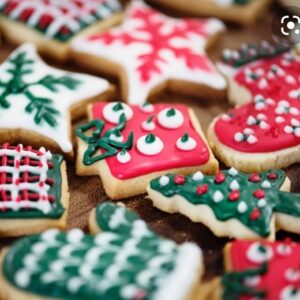 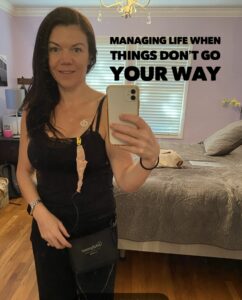